There can be no hope of a sound rebuilding unless and until people understand what money actually is.  As I covered in Parts One and Two of my Economics Presentation on YouTube, MONEY is a FUNGIBLE PROXY for man’s ability to labor, produce and create THROUGH TIME.  Money isn’t gold.  Money isn’t pieces of paper.  Money isn’t zeroes and ones on a computer server.  Money is human life and effort manifested in an agreed-upon form which is used as a convenient medium of exchange.  This is why, for example, when Jon Corzine swept the MFGlobal accounts, one trader at the Chicago Merc (now housed in the Board of Trade building), who kept the majority of his wealth in his MFGlobal account, precisely because it was, according to the Rule of Law, the safest place to store wealth, walked up to one of my order clerk buddies during the first week of November of ARSH 2011, weeping, and said to him, “It’s all gone.  All those years of work … its all gone.”  Note the units.  YEARS OF WORK.  Not dollars, but “YEARS OF MY LIFE”.  Yep.

Let’s say I have a friend to whom I loan some of my money in the form of cash.  Let’s also say that this friend, after years of study and hard work, has acquired a skill set that I would like to learn – let’s say welding.  There are two ways that my friend can repay his debt to me.  The first is for him to repay me in cash money – which is actually a DERIVATIVE.  The second, and PUREST FORM is to repay me in his TIME and SKILL, which is the true underlying entity.

Okay, so we would now have two choices of the form of repayment if we decide that he will repay me in his time and skill.  First, we set an HOURLY RATE, because humans live their lives passing through time, and thus TIME is the baseline unit.  Let’s say $20 per hour is the rate for tutelage in the skill set of welding.  After every one hour lesson, I can reach into my wallet and hand him a $20 bill, which he would then hand immediately back to me, and I would then reduce the balance on his loan in my ledger by $20.  OR, he could take every $20 bill I hand him over the weeks and months of welding tutelage, put it in an envelope marked “Ann”, and when he had the full balance of the loan saved up, hand me the envelope, and then I would close out the ledger as “paid in full”.  THIS is how most people think they MUST do business.  Since people wrongly think that money is the pure commodity itself, and NOT a mere derivative proxy, they insist that this “You hand me a $20 bill and I hand it back to you” maneuver is necessary.  But it isn’t.  In fact, it is silly.  The SIMPLEST way to repay this debt is for me to simply strike $20 from the loan balance for every hour of tutelage, with no further exchange of cash.  In fact, once the hourly rate for the tutoring has been set, the debt COULD be recorded not in dollars, but in HOURS OF HIS LIFE.

This is why Marxism is so evil, and why the Seventh Commandment (Thou shalt not steal) exists.  Forcibly confiscating the property of one person unjustly and giving it unjustly to another person is an act of violence and degradation – utterly denying and disregarding the humanity of the one (the “rich”), presumably in favor of the other (the “poor”).  When this is done in the name of “charity” or “compassion”, it is, in a way, even more evil.  Hey, at least with Jon Corzine we all know where we stand.  Corzine and the other oligarchs feel free to steal other people’s property because they have no respect whatsoever for other human beings.  When religious leaders falsely paint property confiscation and redistribution as “CHARITY”, which is, remember, a constitutive quality of God, namely the joy at the very existence of another – NOT the indifference to the life and existence of the other to which the denial of property rights is an obvious corollary – this is perhaps even more damaging to society.  It is nothing less than calling good, evil and evil, good.    Too bad the Pope doesn’t seem to have even the faintest understanding of this.  He seems to believe that money is MERE paper, MERE zeroes and ones, with no connection whatsoever to actual human beings, and seems to have not the slightest understanding that it is the FREE GIVING of one’s money or property, which is simply a derivative proxy for one’s human capacity to labor, produce or create THROUGH TIME, that is charity, not being gang-raped by oligarchs spewing platitudes about “the poor”.  And don’t even get me started on his seeming failure to comprehend that government debt monetization is the forcible confiscation of wealth from not just the contemporary non-oligarch class, but also from human beings who do not yet exist, and are thus utterly helpless.  This is what happens when Affirmative Action picks the pope, and the influence of Holy Spirit is refused.  But, “the Church is great precisely because She endures the smallness of men”, as Roberto de Mattei said so eloquently and presciently ten days before the election of Pope Francis.

If nobody even understands what money is, how can we possibly hope to rebuild the economy, banking system and financial markets into something other than yet another iteration of the satanic maw of iniquity and villainy that we are now witnessing the implosion of?  “Same song, second verse” is NOT a satisfactory goal.  Not even close.  Either do it right, or lay down, shut up and stay out of the way so that someone better than you can at least have a clean slate from which to start.  Harsh?  Yep.  But true.  So deal.

The next installment in this series will cover banking theory and regulation. 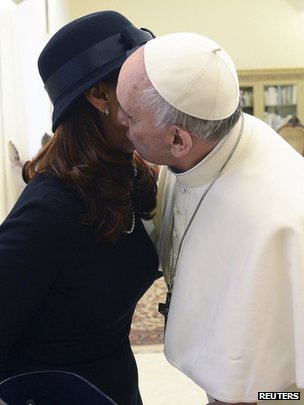 Pope Francis Bergoglio voluntarily kissing for the cameras the oligarch Cristina Fernandez de Kirchner, who has been instrumental in the pillaging of Argentina, and the violent stratification of the Argentine economy into super-rich micro oligarchy and massive, destitute, immobile underclass. But then, Peronist-Fascism isn’t really about economics or justice, it is about the acquisition and retention of personal power, and nothing more.