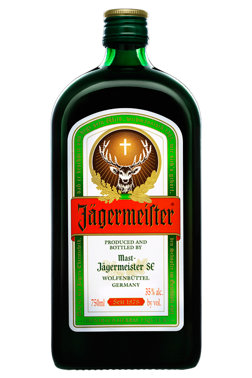 Today is the Feast of Saint Eustace.  The little preamble in my Missal says the following:

“Eustace was commander-in-chief of the army of the Emperor Trajan.  Having refused to thank the gods for a triumph, he was burned to death with his wife and children after undergoing many cruel tortures in (ARSH) 120.”

Eustace was, of course, a convert to Christianity, and it is said that he converted while hunting a stag and having a miraculous vision of a crucifix in the stag’s antlers.  If you look at the bottle of Jagermeister above, you can see the stag with the Cross in its antlers.  The Jagermeisters were the head foresters and gamekeepers in Germany, and St. Eustace is naturally the patron saint of hunters, along with anyone facing adversity, as he suffered Job-like trials in the years between his conversion and martyrdom.

St. Eustace, pray for us!

PS:  I personally don’t like Jagermeister at all, and don’t drink it, so y’all can have my allotment.  🙂