1.  Sautee a mess of onions until caramelized.  Season with salt and white pepper.  Add a mess of chopped, seeded, and (ideally) skinned, tomatoes.  Let it simmer for a spell.  Add enough beef or chicken stock such that the ‘maters can have a nice swim.  Let it simmer for another spell.  Whiz it until smooth in batches in a blender.  Careful.  It’s hot.  Add the whizzed-up slurry back to the pot and dump in a bunch of heavy whipping cream.  Add a fistful of chopped fresh basil.  Heat it back up, season to taste with salt and white pepper, serve with a sprinkle of parmesan cheese.

Cooking without a precise recipe, as with the tomato soup above, builds character, self-reliance and the ability to think and act on one’s feet.  To paraphrase the old saying: Instructions will not be provided.  Neither will permission.

If you can’t make a darn tasty pot of soup out of tomatoes, onions and cream without dependence on a disembodied voice telling you what to do and how to do it down to the minutest detail, then you better check yourself.

2.  More on food and “picky eaters” of various stripes, this time from Orwell in “The Road to Wigand Pier”, circa ARSH 1937:

For instance, I have here a prospectus from another summer school which states its terms per week and then asks me to say ‘whether my diet is ordinary or vegetarian’. They [Socialists] take it for granted, you see, that it is necessary to ask this question. This kind of thing is by itself sufficient to alienate plenty of decent people. And their instinct is perfectly sound, for the food-crank is by definition a person willing to cut himself off from human society in hopes of adding five years on to the life of his carcase; that is, a person out of touch with common humanity.

3.  In case y’all poor, deluded folks who still think that there is hope for Washington D.C., specifically in the person of Ted Cruz, I’d like to go ahead and bust your little bubble – not that you won’t just blow a new one.  But, here goes.  Repeat this over and over again until you understand:

A position to which she ascended immediately after coming out of the Bush-Cheney White House, specifically a seat on the National Security Council.  The same Goldman Sachs that is carrying over $48 TRILLION in derivatives exposure against an asset base of $89 Billion – levered up by a factor of over 500X.  She VOLUNTARILY associates herself with this.

No, I’m sure you’re right.  I’m sure Ted Cruz is DIFFERENT.  I’m sure that the fact his wife is a Goldman Sachs executive has NO BEARING ON ANYTHING, and that he is as pure as the wind-driven snow.  Youbetcha.
EYEROLL.

3A.) In review, The Barnhardt Axiom:

Today, seeking and/or holding office, especially national-level office, is, in and of itself, proof that a given person is psychologically and morally unfit to hold public office.

4.)  Yes.  I saw that Nancy Pelosi “instructed” the Archbishop of San Francisco to NOT attend a pro-marriage march.  The archbishop declined to accept her instruction, but he’s no hero.  The fact that Pelosi has not been publicly excommunicated is a testament to how truly far-gone the episcopacy, and most especially the post-American episcopacy is.

This action of Pelosi (and the rest of the oligarchy) now openly attempting to command and intimidate prelates is YET ANOTHER analogue to the actions of the satanic proto-Marxist French Revolutionaries which I covered in my video presentation on the genocide in the Vendee region of France and its analogues to the current kleptarchical regime now ruling the former-U.S. landmass.  I cannot name ONE bishop in the U.S. who I am confident will stand firm against these people.  Not one.  There has not been a single excommunication.  There has not been a single denial of Holy Communion.  Even conservatives, like Bishop Conley of Lincoln, NE, were immediately pushing the it’s okay if you capitulate, as long as you don’t LIKE it and do it under protest meme. (I would link to the Denver Catholic Register column from August of ARSH 2012, but it has been scrubbed from the ArchDen.org website.)  UPDATE:  A clever reader found the reprint at CNA.   Bishop Conley outlines the “compliance under duress” option.  Give me a break.

5.) And, in a related vein, Cardinal Timmy Dolan, who is an unmitigated jackass, has indeed slated for closing the THRIVING Holy Innocents parish in midtown Manhattan (fabulously located just off Times Square at West 37th and Broadway).  This, after Dolan forcibly expelled a South African priest who DARED give a sermon at Holy Innocents in which he simply exhorted the congregants there to not view themselves as an underclass within the Church or allow others to paint them as such because they love the Holy Sacrifice of the Mass offered as it had been, with reverence, beauty and solemnity, up until ARSH 1968.

Dolan HATES, HATES, HATES the Mass of The Ages and all those who love it.  Why?  Well, see HERE for an explanation of that.  Dolan is, most assuredly, one of those “cool kids who don’t actually believe any of that shit”, and like Judas Iscariot after the Eucharistic Discourse, is embarrassed by it to the point of sputtering, red-faced rage.  How can I say that?  Oh, I dunno.  Maybe because Dolan can’t grovel to the satanic political class with any more boot-licking gusto? 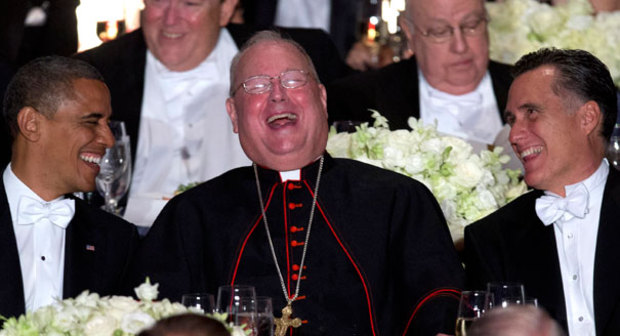 Maybe because Dolan not just tolerates, but openly supports and encourages Masses that CELEBRATE THE SIN OF SODOMY at St. Francis Xavier parish across town?  At 5:35 Dolan cheers the introduction of a group of unrepentant sodomites.  Don’t kid yourselves.  UNREPENTANT.  Because, you know, PRIDE.  BRAVO.  GOOD FOR YOU, and all that.

If you click over to their parish website, right this second the top headline reads “Upcoming LGBTQ Events”, the first of which is a “Pride Mass”.  As in “we are PROUD that we insert our erect penises into the feces-laden descending colons of other men, and then use said descending colons as the point of masturbatory friction.”  I’ll spare us all the lesbian version of that.  Or, stated another way, “we are PROUD to commit one of the four sins that cry out to heaven for God’s vengeance and thus we are PROUD to scourge and nail Jesus Christ to the Cross, are not the least bit sorry, enjoy it, and define ourselves by the fact we enjoy it, are not only entitled to do so but demand that you approve, and actively encourage and recruit others to do so with us.”

St. Francis Xavier parish has Masses in which wicca rituals are inserted into the Mass at the urging of LESBIAN WITCHES.  I have readers who have EYEWITNESSED THIS on multiple occasions.   Also, St. Francis Xavier parish openly encourages and facilitates within the church building itself, the practice of BUDDHISM.   Buddhism denies not only the existence of God, but the existence of reality (which is the same thing, really).  It is diametrically opposed to God and His Holy Church.  So, yeah.  THIS CRAP goes on in NYC with Dolan’s ENTHUSIASTIC support, but the Holy Sacrifice of the Mass offered as it had been for centuries upon centuries upon centuries MUST BE ELIMINATED according to Dolan.  Oh, don’t be fooled by Dolan.  He will continue to sell out God Almighty and His Holy Church for a tinker’s dam.  When the cameras aren’t on, you either play ball with the “Timmy Dolan: Superstar” project or Dolan will END YOU.  Although, I cannot understand how anyone could be fooled by him, because the guy is so transparently phony, his mannerisms,  faux-hyper-sincerity and “aw shucks” demeanor so utterly rehearsed, and is so clearly a self-aggrandizing, sleazoid politician – but, apparently many are.

7.) Hey!  Let’s blow another false premise!  The IRS didn’t lose anything.  They have everything, are lying without compunction or shame, everyone knows they are lying, and there will be no disclosure of any of these emails because they don’t have to do shit and they know it.  There is no Rule of Law.  All there is is thuggery.  The IRS is an operational arm of the regime that has overthrown the United States, specializing in intimidation and enforcement.  Thinking the IRS will hand over anything to Congress is like expecting Rudolf Hess and Hermann Goering to hand over correspondence with Hitler in the summer of ’43 to the Vichy French.  You know.  Because we suspect there may be some *untoward and possibly illegal* activity going on here.  Give me a break.  Listen to yourselves.

8.) Let’s do one more!  The Obama regime WANTS the ISIS (aka the Muslim Brotherhood) to overthrow governments and reform the islamic Caliphate.  Obama hasn’t “lost” Iraq due to incompetence.  THIS WAS THE OBJECTIVE FROM THE VERY BEGINNING.

9.) I’m on a roll, now!  The Obama regime HATES Christians, Christianity and primordially God Himself because the Obama regime is PURE EVIL, and thus not only is it unmoved by the genocide of Christians by the ISIS (Muslim Brotherhood), it is HAPPY that Christians are being wiped out.  They’re not going to do anything to stop it because they WANT Christians exterminated on general principle.

10.) I can’t stop!  The Obama regime has had as a specific objective the dissolving of the U.S.-Mexico border and the ensuing chaos.  Remember Operation Fast & Furious, the ARMING OF THE MEXICAN DRUG CARTELS?  I’ll repost the piece I wrote on July 30, ARSH 2011 on this tomorrow.  It’s creepily uncanny.  Here’s a snippet of the seven objectives I outlined three years ago that would be accomplished by Obama dissolving the U.S.-Mexico border:

So, we would have:

1. Completely open borders
2. MILLIONS of refugees streaming into the U.S.
3. Global insistence that the U.S. accept these refugees
4. Instant de facto amnesty for both pre-Zeta and post-Zeta Mexicans in the U.S.
5. Obama cast as savior of these Mexican refugees
6. Millions of new welfare-dependent Obama voters
7. A lawless Mexico, wide-open to unlimited muslim and Chinese staging

11.)  One more?  Oh, okay.  The Obama regime WANTS oil prices to surge, thus crippling the economy even worse than has already been done, thus driving more people out of work and presumably onto the government teat. Why? Because the Cloward-Piven strategy, the execution of which we are now squarely, undeniably in the throes of, dictates that the only way to fully collapse the power structure of the former United States and establish an open, Marxist tyranny is to consciously overload the government from within with welfare and entitlements, drive the populace into poverty, use the resulting orchestrated poverty to “prove” the failure of free market capitalism, and then use the useful idiots and media to agitate the unwashed masses until they demand their own enslavement in exchange for a mess of pottage, and perhaps a tepid, albeit lying assurance that they will be killed last.  And so shall it be.