The fact that the ObamaCare website is a complete clusterbungle that is totally inoperative is 100% INTENTIONAL.

It was designed to cause denial of service attacks on ITSELF, people.  Come on.  Wake up.  This isn’t difficult.

This reminds me exactly of the Ukraine under Stalin in the early 1930s.  The Ukraine is the breadbasket of eastern Europe.  Tremendous farming and wheat production was centered in the Ukraine.  Under Lenin, and then Stalin, all farms and food production were seized and controlled by the state.  The Soviets hated the Ukrainians and wanted them all dead.  All of them.  So here’s what they did:

At wheat planting time, the farmers all went to the Soviet office in town to get their allocation of seed wheat to plant for that year’s crop.  The Soviets stalled and stalled and then simply refused to give the Ukrainian farmers any seed.  As the planting window narrowed day by day, and then finally closed, the farmers became first ever more urgent, and then resigned themselves in despair to the fact that they would have no crop that year.

Fast forward to wheat harvest time.  The Soviet bureaucrats showed up at the farms and demanded that the farmers deliver that year’s wheat crop harvest.  The farmers, in complete disbelief at the Soviets after having begged and pleaded for seed a few months earlier only to be ignored and then explicitly denied any seed by these very same Soviet bureaucrats, told them that there was no harvest because YOU REFUSED TO GIVE US ANY SEED.

The bureaucrats then accused the farmers of hiding and hoarding the wheat harvest, and summarily executed all of the men and teenaged boys on the spot as “enemies of the Revolution and the people”.  Those were the lucky ones.  The Ukrainians left alive then slowly starved to death, many descending into the madness of starvation.  Many Ukrainian women, insane with hunger, slaughtered, cooked and ate their own children.  Some of those women survived the famine and carried the intense guilt of what they had done for the rest of their lives.  Before this totally state-engineered famine was over, upwards of three million Ukrainians were dead in less than two years.  This event is called The Holodomor. 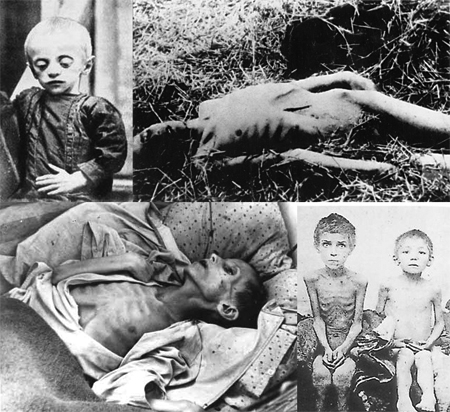 This is what people who have hoarded an entire wheat harvest and gorged themselves on bread look like. Clearly. We know it is true because the nice people with the Hammer and Sickle shirts told us so.

This ObamaCare website is similar in tactic.  You are going to be punished for failing to comply with ObamaCare, even though the regime has specifically and maliciously seen to it that compliance is impossible – not that any person of conscience should even attempt to comply with the satanic ObamaCare anyway.

You people had better man up and do something real and concrete to depose these neo-Stalinist psychopaths.  Mere talk and hand-wringing leads straight to mass graves.