So, one weekday morning last year I got up with the chickens and went to the 8:30am Low Tridentine Mass uptown. It started out normally enough. In processed Father with one server. Father looked a bit flat-footed, but then this particular priest is pretty old, so one doesn’t expect a Fred Astaire-like gait from the quasi-elderly. It wasn’t until the consecrations of the Host and Chalice that it became clear that something was terribly, physically wrong with Father. At each genuflection he had to slightly twist his body and almost lay his upper body on the altar in order to genuflect, bearing much of his weight on his elbows both on the way down and on the way back up. It was obvious with each genuflection that Father was in excruciating pain. I sat in my little spot in the back of the church, at once horrified by the obvious physical distress I was witnessing, but also deeply moved by the courageous perseverance and uncompromising love for Our Lord that Father, seen by only the half-dozen or so people in the nave, demonstrated. Father wasn’t putting on a show, because there was essentially no one there to see it. If he had been saying Mass alone in his room, he would have done exactly the same; of that I have no doubt. Why? Because he loved Our Lord, and to not genuflect to Him would be simply unthinkable. Our Lord, whipped until He was skinned and in shock, thrice bent His knee to us, falling three times beneath His Cross, to demonstrate His complete love for creatures that are totally unworthy of His love. How much more, then, should we bend our knees to Him who is our Creator, our King and our Savior?

It turned out that the priest had gone on a hike up in the Colorado mountains the day before and taken a terrible spill on the way down, tearing open his knee. Thankfully he was in a large group of men, and was thus able to be carried down, and transported to the emergency room in Vail where he had his knee sutured back together. The knee eventually healed, and all’s well that ends well, but for the life of me I have no idea why such an old man was frolicking on such a difficult mountain trail.

I have lately also been reminded of the last years of John Paull II’s pontificate. In the last years, suffering from Parkinson’s, JPII became more and more frail, requiring more and more physical assistance. I can remember seeing Masses in which he was being essentially held up by one man on each side. Most especially, his genuflections after the consecration of the host and then the chalice were particularly moving because toward the end, he looked like a rag doll being lowered and raised by the two men at his sides. This, of course, points directly to the Fifth Station of the Cross, wherein Simon of Cyrene helps Our Lord carry His Cross. How beautiful to see the Vicar of Christ so clearly mirroring Our Lord in His perfect humility, and accepting help in order to bring to consummation and completion the Sacrifice of Calvary, made present in time upon the altar. As I have been told on a near-daily basis from every vector for the last several weeks, failing to ask for and accept help when it is needed is a pure function of pride, not humility. Indeed. I am very prideful.

There is a very important concept in the Church, and in life that says: Lex orandi, lex credendi. In Latin this means “the law of prayer is the law of belief”, or “how we pray is how we believe.” The Mass is a prayer – it is THE prayer par excellence. HOW we pray, and most particularly how we pray the Mass, is of unquantifiable importance. In the two examples above, we see that HOW we pray not only matters, but becomes meritorious and a massive conduit for grace, with the potential to turn instances of personal suffering into evangelical witnesses that could not be matched with any 50,000 word book or sermon. The world is collapsing and falling to pieces because of the destruction of the Mass and the lack of reverence toward Our Lord, most especially in the Mass and in the Blessed Sacrament. The two examples above demonstrated intense love for Our Lord in His Passion, and in His Resurrection by reverencing Him in His Real Presence in the Eucharist. The only hope for the world is MORE reverence in the Mass and towards the Eucharist, not less. The world will never believe that Our Lord is physically present upon the altar and in the Eucharist, in other words, the world will never believe the Gospel, if how we pray does not clearly reflect that supreme reality.

One of the greatest men in the history of the Church said it best:

“Preach the Gospel at all times. If necessary, use words.”

St. Francis of Assisi, pray for us. 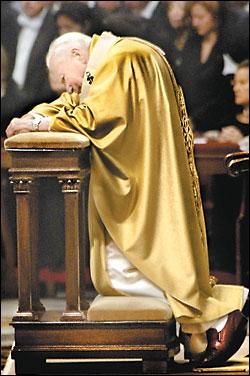