The priest puts his elbows down on the altar because the altar is A MARRIAGE BED, and the act of consecration is the consummation of the nuptial union between God and man, but in that moment the condescension of God is so utterly complete that God becomes, just for a moment, the feminine responder to the masculine initiating action of man who says the words of consecration. The priest lovingly holds the Host in his hands beneath him atop the supernatural marriage bed of the altar, leans over, looks intently at the Host and whispers, “HOC EST ENIM CORPUS MEUM / This is My Body,”† and then with the Chalice, “HIC EST ENIM CALIX SANGUINIS MEI / For this is the Chalice of My Blood.” And then, in the hands of and lying completely vulnerable to man in the supreme act of loving response, is Our Lord, physically present, Body, Blood, Soul and Divinity.

So, for the sake of clarity, YES, the consecration of the Host and Chalice in the Holy Sacrifice of the Mass is a direct analogue to sexual intercourse between husband and wife. There. I said it. That wasn’t so difficult, now was it? Goodness. In fact, the consecration is the GREATER REALITY, and the marital act between husband and wife is the LESSER REALITY which reflects and points to the greater reality of the Holy Sacrifice of the Mass. And, it works both ways. After the consecration, Our Lord goes right back to being the masculine initiator and the priest and the faithful become the normal relative feminine in relation to God in our nature as human beings as we RECEIVE Our Lord by taking Him physically into our bodies in the Eucharist, of which the marital embrace is also an image, only with the gender roles the other way.

The nuptial nature of the Mass was known immediately to the Apostles at the Last Supper. In the ancient Jewish tradition, at marriage feasts, the husband and wife would each take a piece of bread, and each would take turns holding the bread up, saying, “Eat this. This is my body,” and then hand-feeding the piece of bread to the spouse. Where do you think the tradition of the bride and groom feeding each other a piece of the wedding cake at the reception comes from? So when Our Lord said, “This is My Body,” the Apostles all instantly understood the mystical nuptial act that was going on, because they had seen it before at their own weddings and/or weddings they had attended.

Oh, and do you now see why the priest must, must, must be a man? In order for this moment of loving condescension of God to man to happen, the human initiator must be a man, leaning over and atop his God who responds and lays in perfect receptivity upon the altar. There must always be that contrast, that juxtaposition of masculine and feminine. If God is going to condescend all the way to the feminine in that moment, then there cannot be a female at the altar, because a woman cannot be the image of the masculine, no matter how tight she wears her crewcut, or how butch her comportment.

Do you think I’m making this up? Take a look at this picture. This is the Baldachin over the Papal Altar at St. Peter’s Basilica. Many large basilicas and cathedrals built before the Church was infiltrated in the 20th century have baldachins. Do you know what a baldachin is? A baldachin is a bed canopy. And sure enough, there it is, right over the Altar – the marriage bed of God and man. 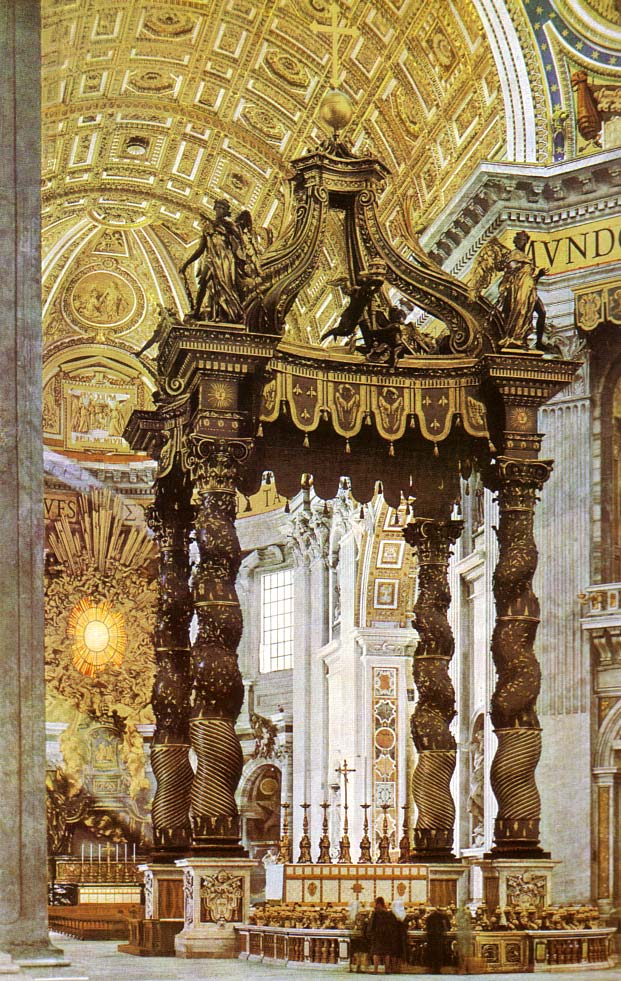