The Presentation of Jesus in the Temple: The Antidote to Narcissism, Elitism and Oligarchy and the Bergoglian Antipapacy

Today, February 2nd, is the Feast of the Presentation of Jesus in the Temple.  This is the Fourth Joyful Mystery of the Rosary, and the fruit of the mystery is OBEDIENCE and LOVE OF THE LAW.

Witnessing what we all have over the past decade, the total collapse of The Rule of Law in the private sector, the government and now The Church under the Bergoglian Antipapacy, the Feast of the Presentation is especially rich with meaning.

On the 40th day after His birth, Joseph and Mary, in perfect obedience to the Levitical Law, took Jesus to the Temple to be “redeemed”:

So, why did Mary and Joseph, and ultimately Christ Himself, an infant of 40 days of age, go to the Temple and perform this action?  Furthermore, why did Mary also at the same time undergo the ritual of Purification, the rite performed on women who had just given birth?

Shouldn’t Mary, Joseph, and ultimately Christ Himself have dispensed themselves from these ritual precepts given the fact that Jesus is God Incarnate, and Mary was preserved in immaculate purity, including her virginity, and thus had absolutely no need of any rite of Purification?

Why did they comply with these Levitical precepts when they were all so clearly above them?

Can you imagine the Blessed Virgin, striding haughtily into the Temple, St. Joseph, nose in the air, looking down his nose at the priests, and declaring, “My Son will NOT be redeemed, because He is the Son of the Living God, The Messiah, and thus The Law does not apply to Him because He is its Author!” And then the Blessed Virgin saying, “And I, having conceived Him by the Holy Ghost, carried Him and borne Him, am The Mother of God, and thus will not submit to the Ritual of Purification, because I am perfectly pure!”

All of the above statements are true, but yet we can hear how narcissistic, elitist, and devoid of TRUE HUMILITY and charity they would have been.  No, Jesus, Mary and Joseph all submitted to and obeyed The Law because to do so is to set a good example, namely by completely rejecting the spirit of elitism, narcissism and oligarchy that utterly permeates our culture. In submitting to The Law at not just the Presentation and Purification 40 days after Our Lord’s birth, but also eight days after His birth when He was circumcised, His Most Precious Blood being shed for the first time – a Proto-Passion, which, in and of itself COULD have been enough to redeem the whole world, because even ONE DROP of Our Lord’s Blood, contains in Itself an infinity of His Mercy – in these acts of GENUINE humility, Jesus, Mary and Joseph provided the most profound witness to the Rule of Law, and a total rejection of the spirit of narcissistic elitism.

Think of every tin-pot dictator. Think of every bureaucrat hanger-on, slavishly defending their criminal overlords.  Think of every financial executive, stealing millions if not billions with zero consequence.  Think of every BigPharma capo and minion, knowingly poisoning humanity. Think of every mafia and racketeering organization. Think of the faggots committing their acts of sacreligious, desacratory sodomy inside the Vatican, and throughout the world. All of it, ultimately, to prove to themselves that they are an elite caste, above the law, accountable only to themselves and their perverse passions.

Think of ourselves, and how many times we have convinced ourselves, in things both big and small, that “The Rules Don’t Apply To Me.”

The example set by Our Lord, Our Lady, and St. Joseph, which we celebrate today on The Feast of the Presentation, is the antidote to elitism, narcissism, and shines a spotlight on The Rule of Law and its criticality.

I hope you never pray the Fourth Joyful Mystery of the Rosary the same ever again.

Happy Feast of The Rule of Law! 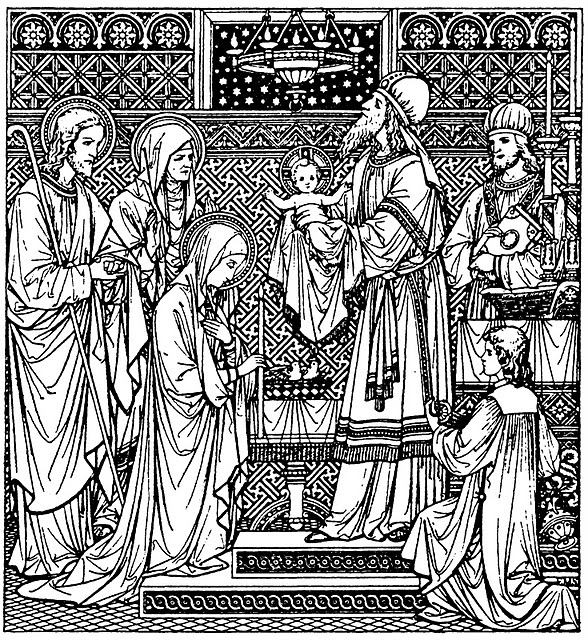