Today is the Feast of St. Thomas the Apostle!

At that time, when it was late that same day, the first of the week, and the doors were shut, where the disciples were gathered together for fear of the Jews, Jesus came, and stood in the midst and said to them: Peace be to you. And when He had said this, He showed them His hands and His side. The disciples therefore were glad, when they saw the Lord. He said therefore to them again: Peace be to you. As the Father hath sent Me, I also send you. When He had said this, He breathed on them, and He said to them: Receive ye the Holy Ghost: whose sins you shall forgive, they are forgiven them; and whose sins you shall retain, they are retained. Now Thomas, one of the Twelve, who is called Didymus, was not with them when Jesus came. The other disciples therefore said to him: We have seen the Lord. But he said to them: Except I shall see in His hands the print of the nails, and put my finger into the place of the nails, and put my hand into His side, I will not believe. And after eight days, again His disciples were within, and Thomas with them. Jesus cometh, the doors being shut, and stood in the midst, and said: Peace be to you. Then He saith to Thomas: Put in thy finger hither, and see My hands, and bring hither thy hand, and put into My side; and be not faithless, but believing. Thomas answered and said to Him: my Lord and my God. Jesus saith to him: Because thou hast seen Me, Thomas, thou hast believed; blessed are they that have not seen, and have believed. Many other signs also did Jesus in the sight of His disciples, which are not written in this book. But these are written, that you may believe that Jesus is the Christ, the Son of God; and that, believing, you may have life in His Name.

Here’s an amazing tidbit from Fr. Z. In the original Greek, the word for “hand” actually sometimes refers to the hand plus the wrist plus the lower forearm. In Ancient Greek, when you are speaking of just the hand proper, additional words can be added to make that precision. Given this, the reality of what exactly happened to St. Thomas might be far, far more intense that what we imagine.

Our Lord has breathed upon the other ten Apostles, minus the absent Thomas, thus imparting the Holy Ghost upon them, and giving them all the power of binding and loosing, thus instituting the Sacrament of Confession. Then, Our Lord appears to them again on the eighth day, and Thomas arrives, and puts his fingers into the finger-sized nail holes in Our Lord’s hands. Then he puts what the Greek indicates is his entire hand, wrist and lower forearm all the way into the lance wound made by Longinus in Our Lord’s thoracic cavity, at Our Lord’s command.

It is conceivably possible that Our Lord breathed the Holy Ghost upon Thomas WHILE THOMAS WAS HOLDING OUR LORD’S LUNG IN HIS HAND, and that Thomas literally touched Our Lord’s BEATING SACRED HEART, and PALPATED THE STAB WOUND in Our Lord’s Sacred Heart.

And if you’re thinking to yourself, “That isn’t possible…”, well, neither is walking through walls. The resurrected body of Our Lord is in an entirely different category. It isn’t held to the laws of the physical universe that bind us as we await our resurrection that He purchased for us.

People wonder why and how the Apostles were able to do what they did, and all but John were killed for the faith, and John was miraculously prevented from being killed, despite multiple efforts. Well, I reckon if we saw one of our friends stick his hand into Our Lord’s thoracic cavity up to the forearm, hold His breathing lung, and touch His Sacred Heart, we might be… confirmed and quickened, to put it mildly.

So, Happy Feast of St. Thomas! I hope you never think of it quite the same way again.

St. Thomas, pray for us.

Lord Jesus Christ, have mercy on us, on Pope Benedict, the one and only living Vicar of Christ on Earth whether he likes it or not, the Papacy, and on Your Holy Catholic Church, outside of which there is no salvation. 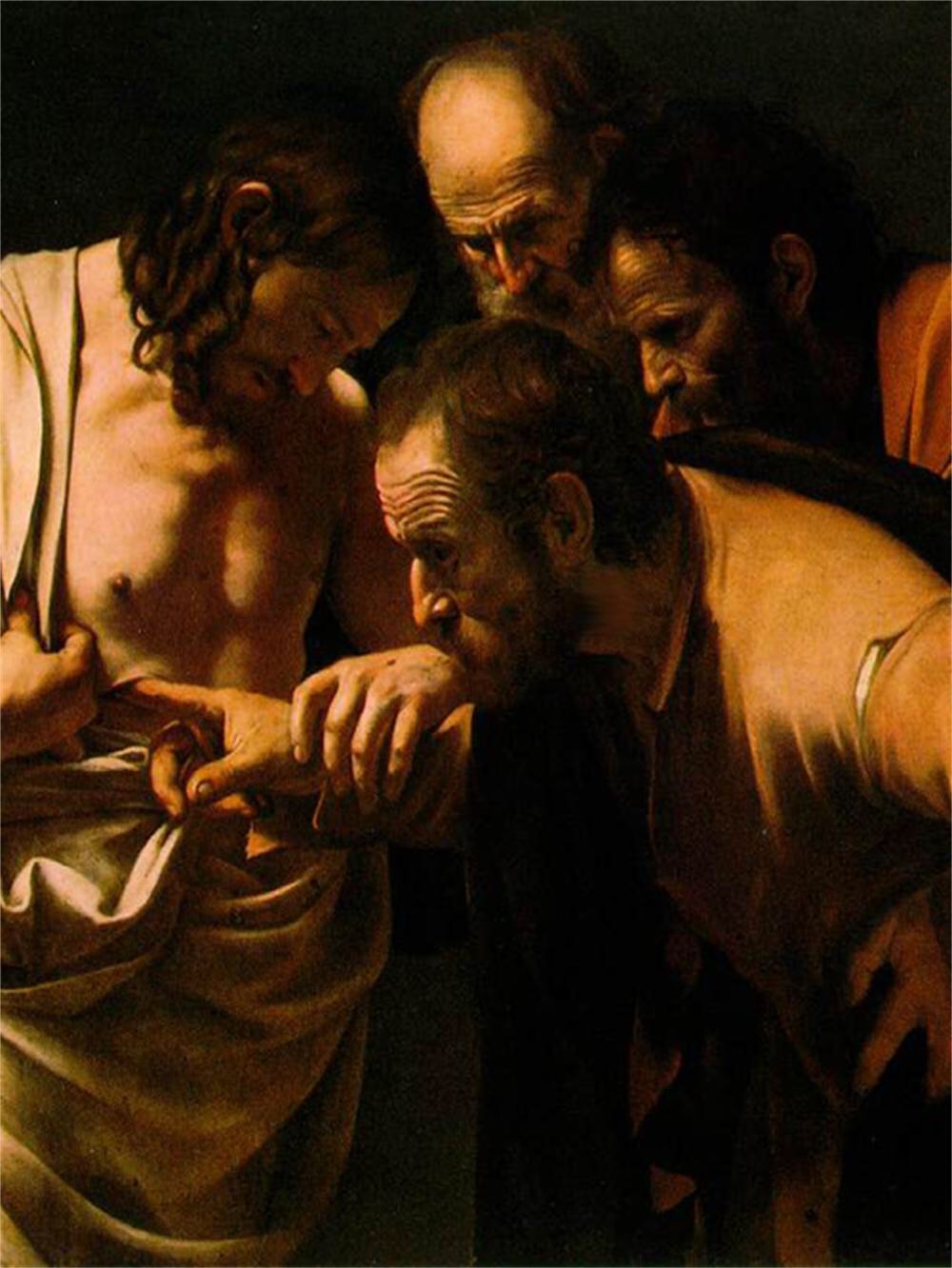