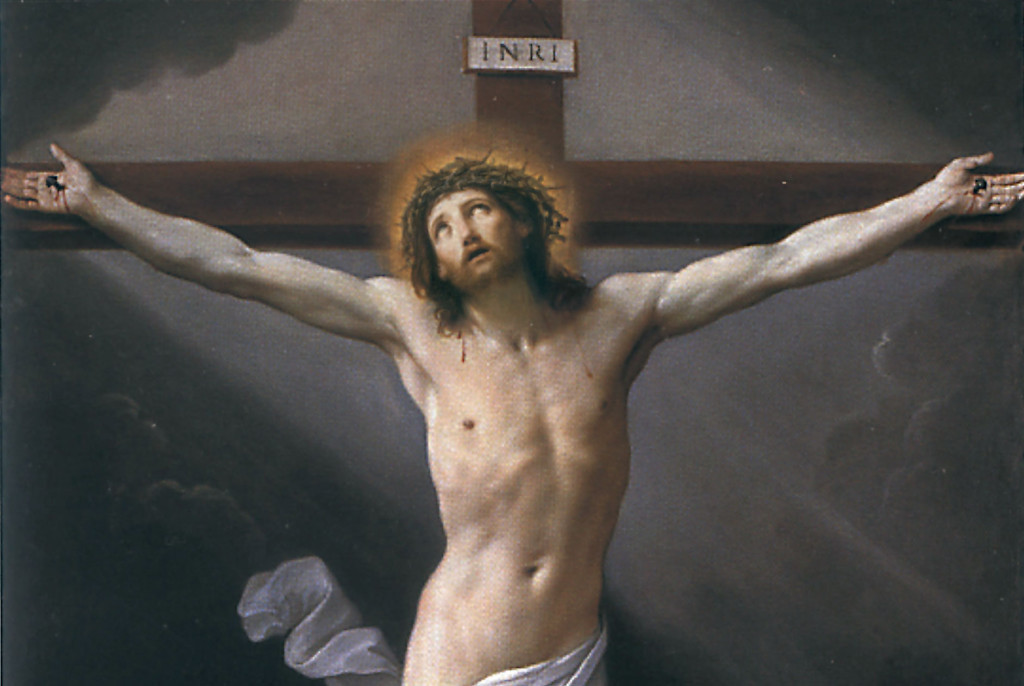 Today is the First Sunday of Lent, and the following verse from Psalm 90 appears three separate times; first in the Tract, then as the Offertory verse, and finally as the Communion verse.

“The Lord will overshadow thee with His shoulders, and under His wings thou shalt trust: His truth shall compass thee with a shield.”  Psalm 90: 4-5

Read the medical description of death by crucifixion below, and then ponder the words, “The Lord will overshadow thee with His shoulders.”

[This is a paraphrase of a summary of an ARSH 1965 article on crucifixion by Dr. C. Truman Davis entitled, “The Anatomical And Physiological Details Of Death By Crucifixion”, originally published in Arizona Medicine.  Since it is widely reproduced on the internet, I have taken the liberty of cleaning up a few things, and correcting scripture citations.  Additions of my prose are in red brackets.]

Crucifixion is the most painful death ever invented by man and is where we get our term “excruciating.”  It was reserved primarily for the most vicious of male criminals.  Our Lord refused the anesthetic wine which was offered to Him by the Roman soldiers in keeping with His promise recorded in Matthew 26: 29, “And I say to you, I will not drink from henceforth of this fruit of the vine, until that day when I shall drink it with you new in the kingdom of My Father.”  Our Lord was stripped naked [This is very important. The depictions of Our Lord with His loincloth intact on the Cross are for the sake of modesty, particularly for women and children.  He was naked.  The humiliation of being hung naked with no way of covering one’s self was in integral part of the humiliation of crucifixion.  Our Blessed Lord spared Himself nothing – the agony of His Passion was maximal.] and His clothing divided by the Roman guards. This was in fulfillment of Psalm 21:19, “They parted My garments amongst them; and upon My vesture they cast lots.”  The Crucifixion of Jesus guaranteed a horrific, slow, painful death.

Having been nailed the Cross, Our Lord now had an impossible anatomical position to maintain.  Jesus’ knees were flexed at about 45 degrees, and He was forced to bear His weight with the muscles of His thigh, which is not an anatomical position which is possible to maintain for more than a few minutes without severe cramp in the muscles of the thigh and calf.  Our Lord’s weight was borne on His feet, with nails driven through them.  As the strength of the muscles of Our Blessed Lord’s lower limbs tired, the weight of His body had to be transferred to His wrists, His arms, and His shoulders.  Within a few minutes of being placed on the Cross, Our Lord’s shoulders were dislocated.  Minutes later His elbows and wrists became dislocated.  The result of these upper limb dislocations was that His arms were 9 inches longer than normal, as clearly shown on the Shroud of Turin.  In addition, prophecy was thus fulfilled in Psalm 21:15, “I am poured out like water; and all my bones are scattered.”

After Our Lord’s wrists, elbows, and shoulders were dislocated, the weight of His body on his upper limbs caused traction forces on the Pectoralis Major muscles of His chest wall.  These traction forces caused His rib cage to be pulled upwards and outwards, in a most unnatural state. His chest wall was permanently in a position of maximal respiratory inspiration. In order to exhale, Jesus had to push down on the nails in His feet to raise His body, and allow His rib cage to move downwards and inwards to expire air from His lungs.  His lungs were in a resting position of constant maximum inspiration. Crucifixion is a medical catastrophe.  The problem was that Our Blessed Lord could not easily push down on the nails in His feet because the muscles of His legs, bent at 45 degrees, were extremely fatigued, in severe cramp, and in an anatomically compromised position.

Despite what is shown in all Hollywood movies about the Crucifixion, the victim was extremely active.  A crucified victim was physiologically forced to move up and down the cross, a distance of about 12 inches, in order to breathe.  The process of respiration caused excruciating pain, mixed with the absolute terror of asphyxiation.  As the six hours of the Crucifixion wore on, Our Lord was less and less able to bear His weight on His legs, as His thigh and calf muscles became increasingly exhausted. [And bear in mind that He had already been scourged until most of His skin was gone, was thus in deep shock, and was then made to march approximately two kilometers while carrying His own Cross.  While fully human, Our Lord’s strength during His Passion was unfathomable.]

There was increasing dislocation of His wrists, elbows and shoulders, and further elevation of His chest wall, making His breathing more and more difficult.  Within minutes of crucifixion Our Lord became severely dyspnoeic (short of breath).  His movements up and down the Cross to breathe caused excruciating pain in His wrists, His feet, and His dislocated elbows and shoulders.  The movements became less frequent as Our Blessed Lord became increasingly exhausted, but the terror of imminent death by asphyxiation forced Him to continue in His efforts to breathe [because His suffering had to be maximal – He had to give us absolutely all of His love].

Our Sweet Lord’s lower limb muscles developed excruciating cramping from the effort of pushing down on His legs, to raise His body, so that He could exhale, in their anatomically compromised position.  The pain from His two shattered median nerves in His wrists exploded with every movement.  Our Lord was covered in His Precious Blood and sweat.  The blood was a result of the Scourging that nearly killed Him, and the sweat as a result of His violent efforts to expire air from His lungs.

Throughout all this He was completely naked, and the leaders of the Jews, the Romans, the crowds, and the bad thief crucified beside Him were jeering, swearing and laughing at Him.  In addition, Our Lord’s own Blessed Mother was watching this, united to His suffering.

Physiologically, Our Lord’s body was undergoing a series of catastrophic and terminal events.  Because Jesus could not maintain adequate ventilation of His lungs, He was now in a state of hypoventilation (inadequate ventilation).  His blood oxygen level began to fall, and He developed Hypoxia (low blood oxygen).  In addition, because of His restricted respiratory movements, His blood carbon dioxide (CO2) level began to rise, a condition known as Hypercapnia.  This rising CO2 level stimulated His heart to beat faster in order to increase the delivery of oxygen, and the removal of CO2.  The Respiratory Center in Our Lord’s brain sent urgent messages to his lungs to breathe faster, and Our Lord began to pant.  Jesus’ physiological reflexes demanded that He take deeper breaths, and He involuntarily moved up and down the Cross much faster, despite the excruciating pain.

The agonizing movements spontaneously started several times a minute, to the delight of the crowd who jeered Him, the Roman soldiers, and the Sanhedrin.  However, due to the nailing of Our Precious Lord to the Cross and His increasing exhaustion, He was unable to provide more oxygen to His oxygen-starved body.  The twin forces of Hypoxia (too little oxygen) and Hypercapnia (too much CO2) caused His heart to beat faster and faster, and Our Lord developed Tachycardia.  His Sacred Heart beat faster and faster, and His pulse rate was probably about 220 beats/ minute, the maximum normally sustainable.  Jesus had drunk nothing for 15 hours, since 6 pm the previous evening.

Our Lord had endured a scourging which nearly killed Him.  He was bleeding from all over His body following the Scourging, the crown of thorns, the nails in His wrists and feet, and the lacerations following His beatings and falls.  Jesus was already extremely dehydrated, and His blood pressure fell alarmingly.  His blood pressure was probably about 80/50.  He was in First Degree Shock, with Hypovolaemia (low blood volume), Tachycardia (excessively fast Heart Rate), Tachypnoea (excessively fast Respiratory Rate), and Hyperhidrosis (excessive sweating).  Sometime after noon Our Lord’s Sacred Heart probably began to physically fail.  Jesus’ lungs probably began to fill up with Pulmonary Oedema.  This only served to exacerbate His breathing, which was already severely compromised.  Jesus was in Heart Failure and Respiratory Failure.  Jesus said, “I thirst” [partly] because His body was crying out for fluids [but also because He was thirsting for souls – both to love them and to be loved by them].  Our Lord was in desperate need of an intravenous infusion of blood and plasma.  He could not breathe properly and was slowly suffocating to death.  At this stage Our Lord probably developed a Haemopericardium: plasma and blood gathered in the space around His Sacred Heart, called the Pericardium.  This fluid around His Sacred Heart caused Cardiac Tamponade (fluid around His Sacred Heart, which prevented it from beating properly).  Because of the increasing physiological demands on Jesus’ Sacred Heart, and the advanced state of Haemopericardium, He may have eventually sustained Cardiac Rupture. His Sacred Heart may have literally burst [before being pierced by the lance of Longinus]. Heart failure was probably the [ultimate physical] cause of His death, [while our sins are the true cause of His suffering and death].

When the Romans wanted to expedite death they would simply break the legs of the victim, causing the victim to suffocate in a matter of minutes. This was called Crucifragrum.  At three o’clock in the afternoon Our Lord said, “It is consummated.”  At that moment, He gave up His Spirit, and He died.  When the soldiers came to Our Lord to break His legs, He was already dead. Not a bone of His Body was broken, in fulfillment of the prophecy in Exodus 12: 46.  Our Precious Lord thus died on the Cross after six hours of the most excruciating and terrifying torture ever invented, after enduring torture in the twelve hours prior to His crucifixion which, by itself, would have been sufficient to kill any other man.