(An allegory. Imagine being on the battlefield, and for some incomprehensible reason, which can only be attributed to diabolical disorientation, the entire officer corps and most of the enlisted men suddenly decide that the Left Flank shall not be defended, re-conned, nor even discussed as a tactical reality, and to do any of those things is treason….)

The two sides meet on the field of battle. An order comes down from on high, and is enthusiastically followed by every officer, and a high percentage of the enlisted men:

“Stop talking about the Left Flank.  It is irrelevant, and distracts from other considerations.”

“Send emissaries to the enemy notifying them of our promise to ignore the Left Flank. They will be impressed by our modern sophistication and reasoned enlightenment.”

Battle begins.  The Left Flank is left completely open and undefended.  Immediately, the enemy mounts an aggressive move to the Left Flank. Enlisted men begin to point this out to their commanders.

“Shut up, stupid! The Left Flank is irrelevant!  It doesn’t matter!”

Banners are hoisted and transmissions are made on all frequencies declaring to the enemy and all observers that the Left Flank will not, under any circumstances, be engaged or defended.

“New order! ALL TROOPS ARE FORBIDDEN TO OBSERVE OR ENGAGE THE LEFT FLANK IN ANY WAY!”

Most Officers and enlisted men begin to curse their own country as having never been legitimate in the first place, and curse each other, and fragging becomes the main battlefield activity.  Many officers negotiate lucrative face-saving surrender plans and join the enemy regime.  Most of the surviving enlisted men go AWOL, permanently resolved to never risk or fight for anything except themselves as individuals henceforth.

The enemy is satan and the Antichurch of the Antichrist.

The Left Flank is the Papacy – usurped and left totally undefended to the Antipope and his legions.

The orders to neither engage nor even observe the Left Flank under threat of court martial is the ideological refusal to even investigate the events of February ARSH 2013 and Pope Benedict’s attempted partial resignation, coupled with the open declarations of the Papacy being “unimportant”, Vatican I being “wrong”, and anyone who does honor the Vicar of Christ as the Church has for 2000 years being guilty of “idolatry”.  The cries of “schismatic” are allegorical to anyone who DARES seek the Truth as to the identity of the Vicar of Christ being a “traitor”, and to summary execution as a “traitor”. Joining the enemy is akin to declaring that the Catholic Church was the schismatic sect that broke away from the true Church in ARSH 1054.

The Carnage inflicted by a relentless, OSTENTATIOUSLY undefended attack by the enemy on the Left Flank is Antipope Bergoglio and the Freemason-Sodomite infiltrators’ near-daily battlefield successes over the past eight years in their war against Jesus Christ and His One, Holy, Catholic and Apostolic Church. 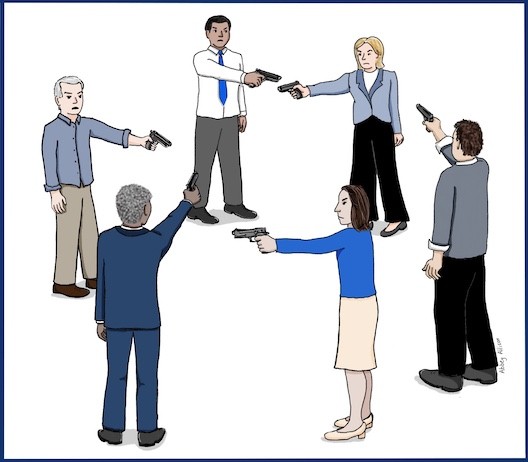