St. Paul on sodomites and their enablers and tolerators in his opening paragraphs to his letter to the Romans.

For professing themselves to be wise, they became fools. And they changed the glory of the incorruptible God into the likeness of the image of a corruptible man, and of birds, and of fourfooted beasts, and of creeping things. Wherefore God gave them up to the desires of their heart, unto uncleanness, to dishonor their own bodies among themselves. Who changed the truth of God into a lie; and worshipped and served the creature rather than the Creator, who is blessed for ever. Amen.

For this cause God delivered them up to shameful affections. For their women have changed the natural use into that use which is against nature. And, in like manner, the men also, leaving the natural use of the women, have burned in their lusts one towards another, men with men working that which is filthy, and receiving in themselves the recompense which was due to their error. And as they liked not to have God in their knowledge, God delivered them up to a reprobate sense, to do those things which are not convenient;  Being filled with all iniquity, malice, fornication, avarice, wickedness, full of envy, murder, contention, deceit, malignity, whisperers, detractors, hateful to God, contumelious, proud, haughty, inventors of evil things, disobedient to parents, foolish, dissolute, without affection, without fidelity, without mercy.

Who, having known the justice of God, did not understand that they who do such things, are worthy of death; and not only they that do them, but they also that consent to them that do them. 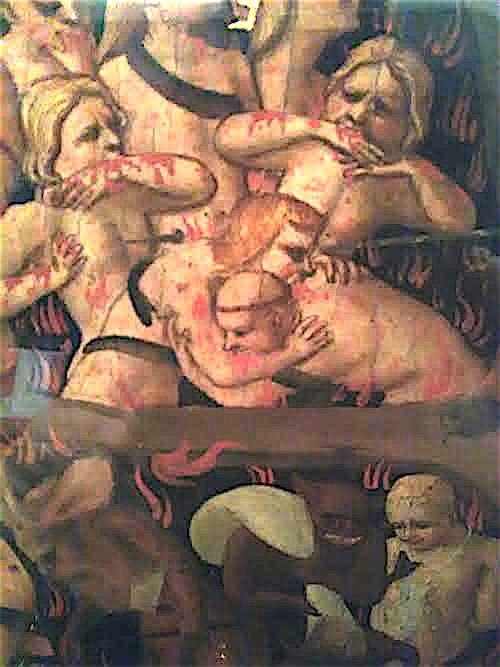