(Let the Angelic Doctor, St. Thomas Aquinas, speak to us, console us, and edify us as The Blessed Mother surely did in the Cenacle as she awaited the fulfillment of her Son’s promise, never doubting for an instant, despite the horror of the previous day, that He would do as He said He would.)

From the descent of Christ to hell we may learn, for our instruction, four things:

1. Firm hope in God. No matter what the trouble in which a man finds himself, he should always put trust in God’s help and rely on it. There is no trouble greater than to find oneself in hell. If then Christ freed those who were in hell, any man who is a friend of God cannot but have great confidence that he too shall be freed from whatever anxiety holds him. “Wisdom forsook not the just when he was sold, but delivered him from sinners; she went down with him into the pit and in bands she left him not” (Wis. x. 13-14). And since to His servants God gives a special assistance, he who serves God should have still greater confidence. “He that feareth the Lord shall tremble at nothing, and shall not be afraid: for he is his hope” (Ecclus. xxxiv. 16).

2. We ought to conceive fear and to rid ourselves of presumption. For although Christ suffered for sinners, and went down into hell to set them free, he did not set all sinners free, but only those who were free of mortal sin. Those who had died in mortal sin He left there. Wherefore for those who have gone down to hell in mortal sin there remains no hope of pardon. They shall be in hell as the holy Fathers are in heaven, that is for ever.

3. We ought to be full of care. Christ went down into hell for our salvation, and we should be careful frequently to go down there too, turning over in our minds hell’s pain and penalties, as did the holy king Ezechias as we read in the prophecy of Isaias, “I said: In the midst of my days I shall go to the gates of hell” (Is. xxxviii. 10).

Those who in their meditation often go down to hell during life, will not easily go down there at death. Such meditations are a powerful arm against sin, and a useful aid to bring a man back from sin. Daily we see men kept from evildoing by the fear of the law’s punishments. How much greater care should they not take on account of the punishment of hell, greater in its duration, in its bitterness and in its variety. “Remember thy last end and thou shalt never sin” (Ecclus. vii. 40).

4. The fact is for us an example of love. Christ went down into hell to set free those that were His own. We, too, therefore, should go down there to help our own. For those who are in purgatory are themselves unable to do anything, and therefore we ought to help them. Truly he would be a harsh man indeed who failed to come to the aid of a kinsman who lay in prison, here on earth. How much more harsh, then, the man who will not aid the friend who is in purgatory, for there is no comparison between the pains there and the pains of this world. “Have pity on me, have pity on me, at least you my friends, because the hand of the Lord hath touched me” (Job xix. 21).

We help the souls in purgatory chiefly by these three means, by masses, by prayers, and by alms giving. Nor is it wonderful that we can do so, for even in this world a friend can make satisfaction for a friend. 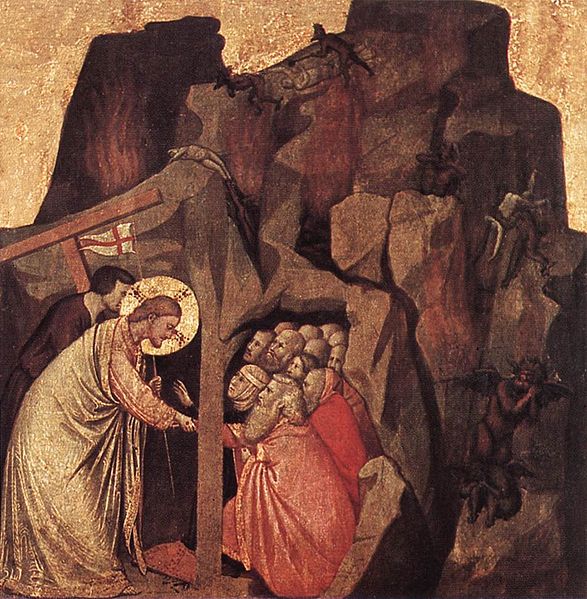 The Harrowing of Hell, Giotto, ARSH 1320.  Note St. Dismas, the Good Thief, carrying the Cross. Also note the demons on the rock outcropping in the background tormenting the eternally damned, that is, those who died in mortal sin.