The goal and purpose of Freemasonry since its inception in London in ARSH 1717 has been the elimination of the Papacy, and then establishment of a dual-pronged One World Government and tandem One World Religion marketed under the name “Humanism.” Freemasons fomented, subsidized and profiteered off of almost every war in the Christian West with the goal of eliminating all monarchies, with the Papacy as the target. American Revolution, French Revolution, Italian Revolution, WWI, WWII.

The Papacy, instituted by Christ and unchangeable, is an Absolute Monarchy. In fact, it is totally unique in that it is a juridical office, in the form of an elected Absolute Monarchy which enjoys a Supernatural negative, “preventative” protection.

Here is the overlooked quote from Antipope Bergoglio from last week:

“The Vatican City State as a form of government, the Curia, whatever it is, is the last European court of an absolute monarchy. The last. The others are now constitutional monarchies, the court is diluted. Here there are still court structures that must fall,” he said.

“People want to reform. For example, the palace of Castel Gandolfo, which comes from a Roman emperor, restored in the Renaissance, today is no longer a papal palace, today it is a museum, it is all a museum,” he said.

Pope Francis (sic) said that it is not his reform, but something “the cardinals have requested.”

“The scheme of the court is what has to disappear. And this was requested by all the cardinals, well, most, thanks be to God,” Pope Francis (sic) said.

As has been documented in this space, the discussion of “fundamentally transforming” the Papacy into a “collegial, synodal, shared ministry” has been discussed openly and at length for over 50 years, with the Miller Dissertation being a compendium of the discussion – a Rosetta Stone, if you will.

At the heart of this drive has been Cardinal Walter Kasper, who became the de facto leader of the Sankt Gallen Mafia with the death on August 30, ARSH 2012 of Cardinal Carlo Martini, the life-long enemy of Joseph Ratzinger, and openly-acknowledged “king maker” at the Cardinals Retreat and faux-conclave held in the Sistine Chapel March 10-13, ARSH 2013.

Chapter 8 of the Miller dissertation opens with a quote from Walter Kasper: “The present crisis of the Papacy is one of legitimation.” As in, the Papacy is no longer tenable in the modern, democratized world, and must be radically changed. This radical change, which would involve the dissolution of the Petrine Office in favor of a shared Petrine ministry or function, is also necessary in order to appease all schismatics, with Lutherans first among them, but also Anglicans, and even the Eastern Orthodox.

If any one man can be called Antipope Bergoglio’s puppetmaster, it is, without question, Walter Kasper.

The odious sacrilegious sodomite Bobby Mickens reported openly on this a few months ago. Papal resignation must become the expectation, the the monarchical Papacy must be totally eliminated- according to the enemies of Jesus Christ and his Holy Church.

I would add at this point that Antipope Bergoglio has become a massive liability to his LutherMasonSodomite handlers. He is widely seen as the protector and enabler of sodomite sex predators that he is, and has lost most of whatever good will he enjoyed just a year ago.

Unless Pope Benedict XVI is acknowledged as the one and only living Pope and the See occupied by him and him alone since April ARSH 2005, Antipope Bergoglio will be told to “resign”, another invalid, faux-conclave will be called (because Canon 359 clearly states that it is ontologically impossible for a valid conclave to be called while the See is occupied, no matter what) and then say hello to Antipope Tagle.

We have to get this right. Quickly.

Blessed Emperor Charles and Zita, pray for us. 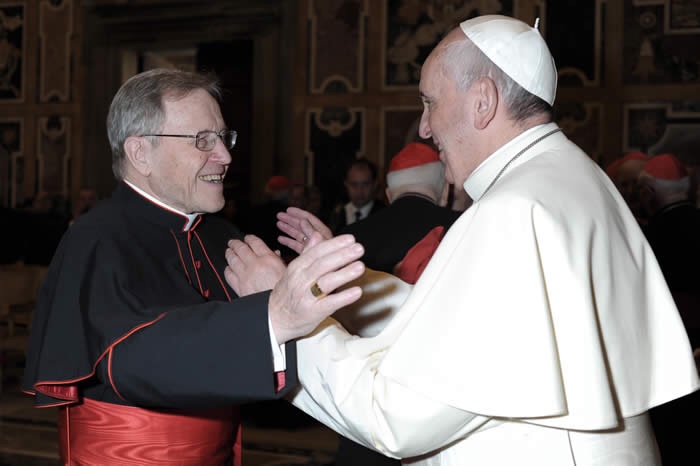