I recently had a very thoughtful piece come across my transom regarding the Eucharistic Fast – that is, the amount of time one abstains from food before receiving Holy Communion.  This is a question that has always stuck in my craw, and after reading the text that was sent to me, I have resolved to only receive Holy Communion if I have fasted from the previous midnight – and I generally go to Mass in the evening these days.

The Eucharistic Fast from midnight was the perennial tradition of the Church going back to the very beginning.  Up until the middle of the twentieth century (RED FLAG!!!!), the three conditions for the faithful receiving Holy Communion as universally taught in every Catechism were:

At this point, I sadly realize that I must explain that priests, of course, receive Holy Communion every time they offer the Holy Sacrifice of the Mass, precisely because the Sacrifice is NOT OFFERED unless the priest consummates the sacrifice by immolating the Body and Blood by consuming Them both.  The consecration causes the Sacred Species to be made present upon the altar, but the Holy Sacrifice is offered when the priest consumes the Body and Blood.  Whether or not anyone else receives Holy Communion is simply not germane to whether or not the Holy Sacrifice is offered, and this is why priests absolutely CAN offer the Mass privately.  And by “privately”, we of course mean that the only other beings present at said Mass are the entire Communion of Saints and the entire Angelic Host.  So, you know, only several hundred billion rational intellects at minimum.  “Private”.

With regard to Pope St. Pius X encouraging frequent Communion by the faithful, I have always assumed that this had to do with the fact that, as Pope Leo XIII was made aware, the world was under escalated satanic attack, as reiterated by Our Lady of Fatima, and confirmed by the events of the past 100+ years.  Given this, Our Lord desired that the remnant faithful be able to receive Holy Communion sacramentally with greater frequency, precisely because it would be needed in this time of war.  Obviously, what goes without saying is that the faithful would need to be properly disposed to receive Holy Communion sacramentally – absolutely NO relaxation of any standards of preparation were countenanced.

Sadly, what did happen was a relaxation of the Eucharistic Fast from the perennial (and common-sensical) MIDNIGHT, to a mere three hours.  This was done by Pope Pius XII in ARSH 1957.  Folks, the war in the Church began long before the conclave of ARSH 1958.  Very bad things had already started to happen, particularly under Pius XII, with the top three being the mangling of the Holy Week Liturgies, the introduction of the so-called Bea Psalter in the Breviary, and the relaxation of the Eucharistic fast to three hours. These were three massive blows to Holy Mother Church – and yes, Pius XII was responsible for them.  The only excuse that can be postulated was the fact that Pius XII was in very poor health in the late 1950s.  We will all find out exactly what happened at the General Judgment.

But back to the point of this piece – the Eucharistic Fast.  Pope Pius XII reduced the fast from midnight to three hours, which is what opened the door to Mass in the evening (along with electrification and the ability to illuminate churches at night).  The fast was further reduced in ARSH 1983 to one hour, something that I have never taken seriously.  One hour is NOT a fast.  The very notion is ridiculous, and defies common sense.  With regards to the three hour fast, this has always stuck in my craw as well.  I’m going to get graphic here, so be warned.  Have you ever gotten sick and thown up three hours after eating?  I have.  Most cases of food poisoning have a several hour delay.  Folks, the contents of the stomach after three hours are halfway between hydrochloric acid and sewage.  Now the question we have to ask ourselves is, if we really, truly believe in the Real Presence of Jesus Christ in the Eucharist, is it really considerate to Him to receive Him into a stomach filled with a slurry of acidic, half digested food?  Remember, He reposes physically in our bodies for approximately fifteen minutes.  Is it really too much to ask that we prepare not only spiritually to receive Him, but also physically by the simple courtesy of having an empty stomach?  Don’t decent people clean their houses when company is coming?  Doesn’t a loving wife take joy in providing a clean home for her husband?  If realizing this, we freely choose to revert to the perennial discipline of the Church of the midnight Eucharistic Fast, which the Church IN NO WAY DISCOURAGES, isn’t it possible that this action, done out of love for Our Eucharistic Lord, might result in even greater graces received from Sacramental Communion, and from any Spiritual Communions that we make at Mass in observance of the midnight Fast?

Secondarily, as I have mentioned before, I usually eat one meal per day, and have been on this general schedule for quite some time now.  On days that I eat two meals, it is almost always due to some sort of social commitment – and I always feel stuffed like the Christmas goose afterwards.  When left to my own devices, one meal is all I want or need these days.  I think food intake and satiation is largely a function of habit.  So, given this, there really is no reason whatsoever that a person of my age (41), in good health, and on the eating schedule that I am already on should NOT observe the Eucharistic Fast from midnight.  If one goes to Mass in the morning (as is best), observing the Eucharistic Fast from midnight really isn’t asking much at all.

I hope that this helps to open up the question to discussion, and ultimately to help people make BETTER Holy Communions, which I think pondering the Eucharistic Fast in a common sense way with regards to the Real Presence and the literal contents of one’s stomach, can do.  We are all so blessed to be able to receive Holy Communion so frequently that we must be all the more vigilant to NOT abuse the privilege, or to address the question for a purely legalistic perspective.  I don’t want to love Our Lord according to the bare minimums of the 1983 Code of Canon Law.  I want to do the best that I can for Him, and in those areas in which I could do more for Him, I want to do more for Him.  I think the Eucharistic Fast from midnight is a great place to start.

“He feeds me lest I faint, or fall, or die, with Food from Heaven.  He, His own Self, in wondrous mystery, to me has given.” 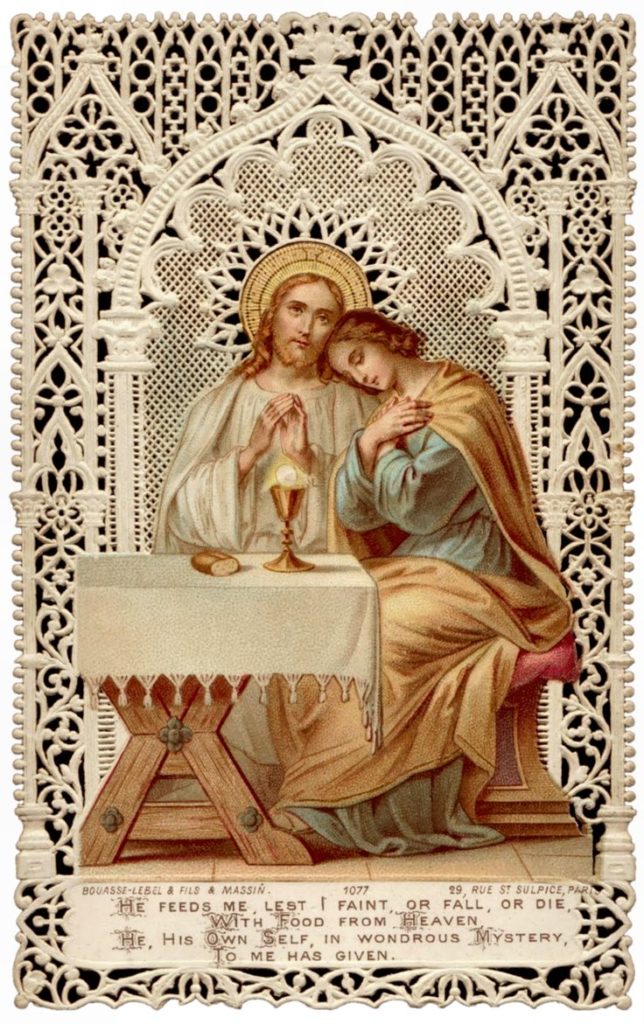