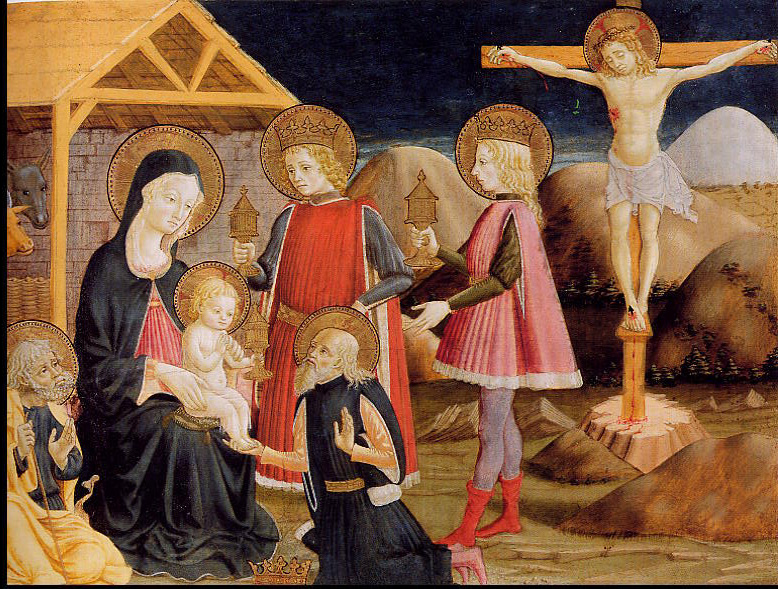 King and God and Sacrifice. Remember, He was born to die.

1.  Well, there are no drones circling, at least that I can see, so I figure it is safe to come to periscope depth and make another comm check before I get my computer back.  Good grief, there is so much to say that I almost have anti-writer’s block.  Paralyzed by TOO MUCH prose sloshing about in the ol’ strawberry jam bucket.

2.  I’ll start with fondest wishes for a very happy new year, and sincerest, deepest thanks for all donors, supporters and prayer warriors.  About the kindest thing I can think to say is I hope you all go broke, get the IRS on your tail, and end up in your very own “Van Down By The River”.  May you all be blessed one one-hundredth as much as I am.  I wake up in the mornings and STILL can’t believe teh awesomeness.

3.  I get STILL get several emails per day asking what ARSH stands for on the date stamp.  The explanation is item #2 on the FAQ page, but for simplicity’s sake I will restate:
Anno
Reparatae
Salutis
Humanae

“In the Year of the Reparation of Human Salvation.”

Why?  Because A.D. just isn’t hardcore enough for me.

4.  I read an account of a death recently in which a priest told the dying person, “Our Lord loves you.  Our Lady loves you.  All of the angels love you.  And all of the saints love you.”

I admit to being struck by the last two sentences.  I know Our Lord loves me.  I know Our Lady loves me.  But, I had never really considered the fact that ALL of the angels love me, and that ALL of the saints, that is to say EVERY person that is in heaven, love me.  It is a strange thing to consider.  I mostly think only of my poor guardian angel, who I am sure loves me, but mostly in the exasperated, I-wanna-give-you-a-good-spankin, double-face-palm, oh-God-why-me sense.  I think I shall endeavor to think about this more.  You should do the same, because the same goes for you, too.

5.  The 29th of December was the feast of St. Thomas a Becket.  His friend King Henry II had him killed after the King made him Archbishop of Canterbury thinking that Becket would be his pawn, and instead Becket stood up to the King when he tried to impinge upon the authority of the Church.  The King’s goons killed Becket on the altar as he was celebrating Vespers.  They ran him through, but he wasn’t killed immediately so they then struck a sword blow that cut off the top of Becket’s skull, and then picked his brains out with the tips of their swords.

I repeat this only because I want you to understand how weak today’s bishops are.  King Henry II did not attempt to make anyone pay for abortions or ratify the cult of sodomy.  Not even close.

6.  Speaking of which, late breaking news is that the $1.00 per month abortion surcharge, which was, according to the text of the ObamaRape law, supposed to appear as a separate line-item on all insurance plans has been modified by the totalitarian regime to be charged, yet hidden.  That citation is here.  There is still absolutely an explicit “abortion fund” that will be fed by these $1.00 per month surcharges, but the regime as decided that it would probably be better for them if you just didn’t know about it, and it merely be added to a more benign-sounding “service fee” line item.  Why are you people still participating in any of this?  Who are these people who are actually “signing up” for ObamaCare, knowing full well that it is a scam and that the websites are merely phishing interfaces?  If you all would simply cancel all insurance and create demand for cash-on-the-barrel-head medical services, aka “concierge medicine”, AND declare a tax strike, all of this could be non-violently resolved.  BUT NOOOOO.  You cower in fear, and thus guarantee the most horrific, violent path.  They have power over you because you fear the loss of earthly possessions and do not fear God.

7.  Speaking of which, a certain Peronist-Fascist cleric from the economic, moral and liturgical hellhole known as “Argentina” said recently that we need not fear God and the Judgment.  Um, when I get my computer back I’ll be writing a piece on Fear of the Lord.  Remind me.

8.  Reiterating briefly my position on the Novus Ordo Mass, yes, it is valid, so long as the right form and matter are used.  Which reminds me: do you know what the difference between invalid and illicit is?  If a Mass is invalid, Our Lord does not substantially come down upon the altar.  If the Mass is illicit, He comes … but He is VERY angry.

There are two points here.  The first is that the fact that the Novus Ordo is valid is precisely the problem.  The Anglicans can have a Vegas-style can-can line of sodomite bishops wearing sequined bikinis with their lesbian bishops bedecked in flannel playing softball ON TOP OF THE ALTAR  with their “communion” bread and wine being tampled underfoot and spilled on the floor for all I care, because … and pay close attention now … Anglican “altars” are JUST TABLES, and the bread and wine IS JUST BREAD AND JUST WINE because there is no validity and thus no consecration.  Same thing goes for all other protesting sects.  The engineers of the Novus Ordo, with satanic “help”, while wreaking havoc on the Mass DID NOT invalidate it, thus, Our Sweet Jesus has to retread the streets of Jerusalem, being mocked, roughly manhandled, physically abused and ignored all over again.

Now ANOTHER point, which is actually quite edifying.  The validity of the Novus Ordo Mass is, quite possibly, the most persuasive proof set of the INDEFECTIBILITY OF THE CHURCH.

“By this term is signified, not merely that the Church will persist to the end of time, but further, that it will be preserved unimpaired in its essential characteristics. The Church can never undergo any constitutional change, which will make it, as a social organism, something different from what it was originally. It can never become corrupt in faith or in morals; nor can it ever lose the Apostolic hierarchy, or the Sacraments through which Christ communicates grace to men.”

Yup.  To deny the validity of the Novus Ordo is to deny the Indefectible Nature of the Church, which is non-negotiable dogma.  This doesn’t mean the Novus Ordo qua Novus Ordo is GOOD because it is NOT – it is illicit.  What it means that GOD is good, faithful and EXTREMELY MERCIFUL.  The Novus Ordo must be exterminated before the world has any hope of recovery.  Period.  It cannot be “fixed” because it was conceived in malice by a cadre of infiltrators who hated God, His Holy Church, His angels and His saints.  And then, after that lofty and excellent goal is accomplished, many, many millions of words can and will be penned on the infinite and unfathomable faithfulness and mercy of Our Blessed Lord for never, ever abandoning His Bride even when He was being abused, mocked and ignored by the vast, vast, vast majority of priests AND laity at the Holy Sacrifice of the Mass.

THAT is how God turns temporary horrors like the Novus Ordo and post-Vatican II milieu into vectors for His Glory.