Originally penned and posted on February 11, ARSH 2011 under the title, “Permanently Disqualified From Everything”.

I received a call from the one (and we hope it is ONLY one) Obama-loving cattleman in the country. What a delightful conversation. According to this guy the solution to every problem is NOT to fix the problem itself, but to make it infinitely worse by imposing Marxist rule. For example, the solution to the problem of people freeloading on the healthcare industry is NOT private charity, charitably endowed hospitals, reducing healthcare costs by fostering competition, both among healthcare providers AND among insurance companies, capping malpractice awards, or enforcing the rule of law vis-a-vis immigration. No. The solution is to completely destroy the insurance industry AND the health care industry so that no one gets any healthcare at all. Don’t actually solve the problem. Make it infinitely worse and impose Marxist tyranny at the same time.

And according to this guy the best way to deal with the $700 billion dollar deficit created by George W. Bush, which was the most horrible thing any person ever did in the history of the world, was for Obama to burn through an additional FOUR TRILLION DOLLARS in two years – which was AWESOME. That’s right. Don’t actually solve the problem. Make it infinitely worse and impose Marxist tyranny at the same time. Like I said, this was a DELIGHTFUL conversation.

But here’s what I wanted to share with you – and this will be of particular interest to all of you readers who only read me because you hate me so much. I know you’re out there, and remember, the first step out of addiction is to admit that you have a problem. You all will want to screen capture this, or PDF it and save it on a thumb drive which you then bury in a mayonaisse jar. This post will absolutely, positively disqualify me from ANY public position or office anywhere on earth for the duration of my life aside from self-employment.

Mr. Cowbama and I were talking about the evil of government regulation and how it almost always does far more harm than good when Mr. Cowbama thought he had me in a check-mate. He smugly said, “So you think the 19th amendment should be repealed, then? You think giving women the right to vote was a bad thing?”

Quoth I in retort,

Will it ever happen? Nope. But it sure is fun to dream. Do you know when things really started to go – literally – to hell in this country? When women were given the right to vote seperate and apart from their husbands. What a disaster. This is when the war against marriage and the family began in earnest – and it has taken less than 100 years for both institutions to be almost completely destroyed. And it all started with the damn suffrage.

Here’s the deal. Up until women’s suffrage, a man was the head of his marriage and his household, and his vote represented not just himself but his entire family, including his wife and his children. When men voted, they were conscious of the fact that they were voting not just for themselves and their own personal interests, but they were also charged with the responsibility of discerning and making the ultimate decision about what was in the best interests of their entire family. Wow. Isn’t that nuts? Men being . . . responsible?

As soon as the 19th amendment was passed, men were effectively castrated, and in many, many cases disenfranchised by their wives. No longer was the man the head of the household. No longer was he responsible for his wife. Now the wife was a “co-husband” at best, or a flat-out adversary at worst. The notion of a man making the final decision about what was best for his wife and family per his God-given vocation as husband and father was now over. Now all he was good for was bringing home the bacon – but even that wouldn’t last.

Women are made with a healthy, innate desire to be provided for and protected. I know this because I am a woman, despite the pair of enormous brass balls I have to carry around. Those are merely an anomaly. Please ignore them, and no, you may not touch them. I just polished them last night. Back to the point, women want someone or someTHING to take care of them. For this reason, women tend to lean socialist, and are generally in favor of the expansion of government when the government promises to “provide” for them.

If you have read me for any length of time you could probably write this next paragraph yourself. Satan has used this healthy feminine dynamic, perverted by suffrage, to systematically replace men with the government as the providers in society. A woman no longer has any need of a man. Marriage no longer serves any practical purpose. A woman can whore around and have as many fatherless children as she pleases, and Pimp Daddy Government will always be there to provide. Men have learned well from this, too. Men can also slut it up to their heart’s content knowing that the government will take care of their “women” and raise their children for them. Fathering children no longer binds a man to a woman in any way. Men didn’t vote to societally castrate themselves, and never would have. No – in order for this system to have come about, women’s suffrage was an absolute necessity. Women themselves voted the system into place which objectifies and devalues both them AND their children.

Next, the issue of disenfranchisement. I believe that the 19th amendment actually DISenfranchised more people than it enfranchised. Many, many married couples quickly found themselves voting against one another. The man would tend to vote for the more conservative platform, and the woman would vote for the more socialist platform. When this happened, the effective result was the nullification of BOTH individuals’ votes. What this did was massively reduce the voting influence of the married household, and magnify the voting influence of the unmarried – and the unmarried tend to be younger, and thus more stupid, and thus vote for big government. It was all part of the plan, kids. All part of the plan. 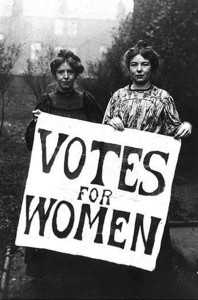 Those dishes aren’t going to wash themselves, Girls.

I’ve probably ticked even one or two of you conservatives off with this post. Here is the question I would ask you: Why? Why are you ticked off? If you’re a woman, the reason you are ticked off is because you put yourself and your desire to assert your will above the well-being of society in general. I don’t feel that way. I would give up my vote in a HEARTBEAT if it meant that right-ordered marriage, family and sexuality was restored to our culture. I would rather that little girls today grow up in a world where they did not have the so-called “right” (voting is NOT a right) to vote, but was treated with dignity and respect, was addressed as “ma’am”, had doors held for her, and wherein men stood up when she entered the room. I would rather she be courted properly and then marry a man who would never, ever leave her, and would consider it his sacred duty and honor to protect and provide for her and their children because he LOVED them. Oh, HELL yes. I’ll give up my vote in exchange for that any day of the week and twice on Sunday. Why wouldn’t you?

For you men who don’t like my position, you’re just a slave to political correctness. It’s the same thing as the rap music. No one will criticize rap music because it is forbidden by the P.C. culture to criticize a non-white cultural phenomenon. To do so is “bigoted”. It’s the same with this. The P.C. culture has convinced you that if you criticize anything that has to do with women or the feminine culture that you must be a Taliban. Don’t fall for that garbage. That manipulation is why fifty million babies have been murdered in this country over the last 38 years. Men knew that abortion was murder, but they punted on it and eventually legalized it because they didn’t want to be accused of being “misogynistic”. Cowards.

So there you go. Print it, save it, PDF it. Because I acknowledge the objective reality and massively disordered consequences of female suffrage, am able to see beyond my own immediate self-interests on the matter, and have the stones to say it all publicly, I am permanently disqualified from . . . pretty much everything outside self-employment.