Excerpted below is Maike Hickson’s reportage and translation of Paul Badde’s EWTN interview with Archbishop Georg Gänswein one week after Gänswein’s 20 May ARSH 2016 speech at the Gregorianum in Rome, outlining the total illegality and canonical invalidity of Pope Benedict’s failed attempted partial resignation/bifurcation of the Petrine Munus.

If you have never taken the quarter of an hour it takes to sit down and read Gänswein’s 20 May speech in full, I beg you to click here and do so now.

Then read the reportage of the interview he gave one week later, excerpted below.

Then sit and stillness and consider the YEARS of ruthless, unrelenting insistence by Trad Inc. parti$an$ and the rest of the Novus Ordo world, consisting of CEASELESS GASLIGHTING, ad hominem attacks, name-calling, personal insults, slanders, attempted character assassinations, and even malicious, calculated campaigns of full-blown personal calumny, that there is NO EVIDENCE of ANYTHING amiss or afoul; that ANY questioning whatsoever of Bergoglio qua Pope and the canonical validity of Pope Benedict’s attempted partial resignation is the domain of schizophrenic conspiracy theories and the mortal sin of SCHISM; and then contemplate that no one, not ONE PERSON inside the Roman Curia did ANY Canonical due diligence with regards to Pope Benedict’s attempted partial resignation in February ARSH 2013 because “it was obvious that there is no problem whatsoever with his resignation.” Riiiiiight.

Badde reports in his interview that he knows of cardinals in the Vatican “who are still shocked that the Catholic Church has right now two living successors of Peter.” He continues: “You yourself have recently spoken about an enlargement of the Petrine ministry, of an exponentiation, I believe. Could you explain this a little more?”

Yes, you refer here to the book presentation of an Italian professor, Roberto Regoli, who has written a book about the first evaluation of the pontificate [of Pope Benedict]. He is professor at the Gregorian University and that is where the book was presented, as well. I was one of the two persons who presented it, and indeed, I spoke about a exponentiated [enlarged] pontificate. It is clear – to say it clearly, because I have seen in some of the reactions how people insinuated things that I never said. Of course: Pope Francis is the lawfully elected and lawful pope. That is to say, there are not two popes – the one lawful, the other unlawful, that is simply not correct. And I simply said – that is also what Pope Benedict said – that he, after all, is still present with his prayers, with his sacrifices, in the “Recinto” of Saint Peter [within the walls and precincts of the Vatican], and that, through these prayers, through these sacrifices, there shall come forth spiritual fruit for his successors and for the Church. That is what I meant to say, and now we have had for three years two popes and I have the impression that the reality that I perceive is covered by what I have said.

Paul Badde then sums up how he understands what Archbishop Gänswein tries to say:

If I understand you aright, he [Benedict] remained in the office, but in the contemplative part, without having any authority to decide. Thus we have – as you said – now an active and a contemplative part which form together an enlargement of the Munus Petrinum [primacy and office of Peter]?

That is what I have said, indeed, that – if one wishes to specify it – it is very clear, the Plena Potestas, the Plenitudo Potestatis [full power, incarnate authority] is in the hands of Pope Francis. He is the man who has right now the succession of Peter. And then there are no difficulties left, as I also have said it. These two are also not in a competitive relationship. That is where one has to make use of common sense, as well as the Faith and a little bit of theology. Then one does not have at all difficulties to understand properly [sic] what I have said. 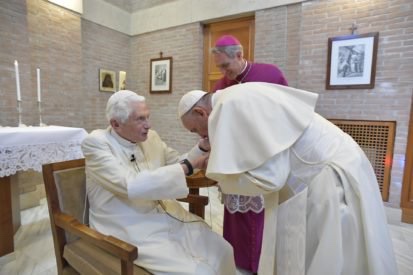