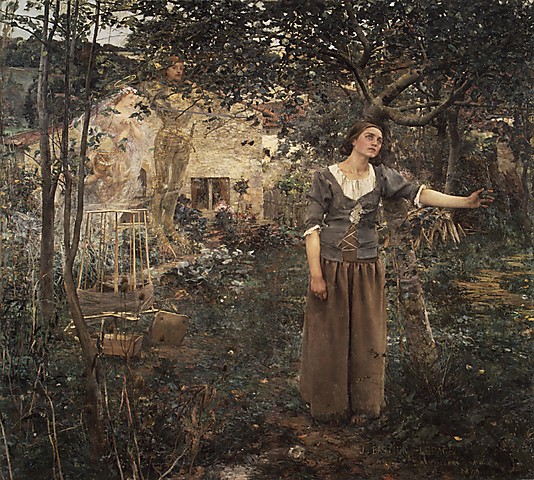 “Consider this unique an imposing distinction. Since the writing of human history, Joan of Arc is the only person, of either sex, who has ever held supreme command of the military forces of a nation at the age of seventeen.”

When we reflect that her century was the brutallest, the wickedest, the rottenest in history since the darkest ages, we are lost in wonder at the miracle of such a product from such a soil. The contrast between her and her century is the contrast between day and night. She was truthful when lying was the common speech of men; she was honest when honesty was become a lost virtue; she was a keeper of promises when the keeping of a promise was expected of no one; she gave her great mind to great thoughts and great purposes when other great minds wasted themselves upon pretty fancies or upon poor ambitions; she was modest and fine and delicate when to be loud and course might be said to be universal; she was full of pity when a merciless cruelty was the rule; she was steadfast when stability was unknown, and honourable in an age which had forgotten what honour was; she was a rock of convictions in a time when men believed in nothing and scoffed at all things; she was unfailingly true in an age that was false to the core; she maintained her personal dignity unimpaired in an age of fawnings and servilities; she was of a dauntless courage when hope and courage had perished in the hearts of her nation; she was spotlessly pure in mind and body when society in the highest places was foul in both – she was all these things in an age when crime was the common business of lords and princes, and when the highest personages in Christendom were able to astonish even that infamous era and make it stand aghast at the spectacle of their atrocious lives black with unimaginable treacheries, butcheries, and bestialities.

She was perhaps the only entirely unselfish person whose name has a place in profane history. No vestige or suggestion of self-seeking can be found in any word or deed of hers. When she had rescued her King from his vagabondage, and set his crown upon his head, she was offered rewards and honours, but she refused them all, and would take nothing. All she would take for herself – if the King would grant it – was leave to go back to her village home, and tend her sheep again, and feel her mother’s arms about her, and be her housemaid and helper. The selfishness of this unspoiled general of victorious armies, companion of princes, and idol of an applauding and grateful nation, reached but that far and no farther.

The work wrought by Joan of Arc may fairly be regarded as ranking with any in history, when one considers the conditions under which it was undertaken, the obstacles in the way, and the means at her disposal. Caesar carried conquest far, but he did it with the trained and confident veterans of Rome, and was a trained soldier himself … but Joan of Arc, a mere child in years, ignorant, unlettered, a poor village girl unknown and without influence, found a great nation lying in chains, helpless and hopeless under an alien domination, its treasury bankrupt, its soldiers disheartened and dispersed, all spirit torpid, all courage dead in the hearts of the people through long years of foreign and domestic outrage and oppression, their King cowed, resigned to its fate, and preparing to fly the country; and she laid her hand upon this nation, this corpse, and it rose and followed her. She led it from victory to victory, she turned back the tide of the Hundred Years’ War, she fatally crippled the English power, and died with the earned title of Deliver of France, which she bears to this day.

And for all reward, the French King whom she had crowned stood supine and indifferent while French priests took the noble child, the most innocent, the most lovely, the most adorable the ages have produced, and burned her alive at the stake.

Saint Joan of Arc, pray for us.